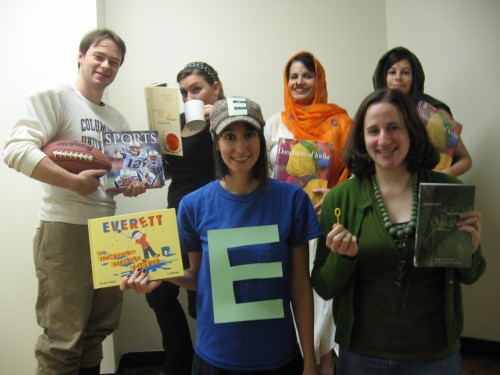 This past Friday we at Abbeville took a break from editing, producing, and marketing our books in order to dress as them. Yes, it was time for our annual inter-office Abbeville Book Costume Contest, and the winner, as the photo above demonstrates, was Halloween itself. (Click here for last year’s photo.)

Up front are Briana as the star of our new children’s release Everett, the Incredibly Helpful Helper and Erin as The Green Bubble, our investor’s guide to the possibilities and pitfalls of the green energy revolution (nota bene: bubble wand!). In the back row, left to right, are Austin as A Year in Sports (looks like the year he chose was circa 1927), Megan as a tea drinker availing herself of our new Tea Drinker’s Handbook, and Louise and Michaelann as two proud Daughters of India.

After work we joined the cavalcade of madness in the West Village, where New York’s artsiest congregate each October 31 to display the fruits of their drunken creativity. There we found plenty of other costumes to judge and plenty of time in which to judge them, since neighborhood population density shot up to twenty-eight people per square foot and just crossing Christopher Street took fifteen minutes. Our two main observations this year? Far fewer Sarah Palins than everyone predicted (we spotted only one; it was such a popular choice that nobody chose it), and way too many variations on the “I’m a website!” theme (a Facebook page, Gchat window, etc.), an innovation that was welcome four or five years ago but must now be considered officially passé. Unless, of course, you choose to dress up as The Abbeville Manual of Style, in which case you will be the toast of any Halloween and any holiday, period.