In the coming weeks, our blog will be restored.

Stay tuned for an interview with Carter Ratcliff, book reviews, and incisive commentary by Austin, our blogger-in-chief.

Filed under Art, Books and Publishing

The Abbeville blog has  MOVED! You can now read this post here.

Secretary of the Arts Petition

Tagged as bailout, national endowment for the arts, president obama, quincy jones, secretary of the arts

Not long ago, reader Julie Weathers suggested a new addition to the Manual of Style: a Q&A column called “Dear Abbeville.” Touched by her faith in the multifarious expertise we claim to have, we couldn’t let her down; besides, the pun on “Dear Abby” was too good to resist. As of today the column is an official feature, so we are soliciting questions from you, our readers, on the following topics:

Please restrict questions to those that cannot be better answered via our FAQ page or a simple Web search. Blatantly self-serving questions (e.g., “In your opinion, how stylish is my personal website, www.monkeysuncle.org?”) will be summarily dismissed. Beyond that, anything is fair game, so fire away! All questions should be submitted to the email address given on our Contact page, or via the Comments form. Disclaimer: accurate, useful, or even serious answers are not guaranteed. Not all questions submitted will be answered. Not all questions answered will be published. That said, we will do our level best on all of these counts. Except for the “serious” part.

From Abbeville’s The White House: Its Historic Furnishings & First Families

A few of you may have noticed that Barack Obama was sworn in yesterday as the 44th president of the United States. We will leave political commentary in the capable hands of other blogs and instead provide an aesthetic appraisal of the ceremony in all its aspects.

The swearing-in: Charmingly awkward. Obama seemed to trip over his lines, with considerable help from Chief Justice John Roberts. Reminded us of a groom stumbling over the wedding vows—and in much the same way, actually pointed up the significance of the moment. Foiled the news networks’ desire for a nice, tidy sound bite.

The inaugural quartet: Shaker folk music by way of Aaron Copland by way of Hollywood composer John Williams: no mistaking which country we’re in here. The arrangement was dignified and the performance as lovely as you’d expect from all-star quartet Gabriela Montero, Anthony McGill, Itzhak Perlman, and Yo-Yo Ma.

The inaugural poem: The less said about this, the better, although we realize it’s hard to write a good occasion poem on relatively short notice for an audience of several billion.

The speech: Quite successful, especially for the genre. Contained no instantly quotable rhetorical flourishes, but was well-delivered (obviously) and skillfully argued in the passage about rejecting false dichotomies (e.g. “we ask…not whether our government is too big or too small, but whether it works”). The subtlest touch was actually the Biblical quotation. Describing America as “a young nation” is a staple of almost all inaugural addresses, but Obama provided a highly original twist by citing Paul’s famous words in First Corinthians: “When I became a man, I put aside childish things.” Left unsaid, but surely meant to echo in the audience’s mind, was the rest of the passage, with its summons to faith, hope, and especially, charity. The poignancy of a fairly young president telling a nation in crisis to grow up may well be the best-remembered aspect of the speech. 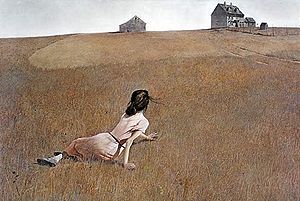 As everyone will have heard by now, Andrew Wyeth has died at the ripe old age of 91. We wanted to take a moment to remember him—and of course, to weigh in on his legacy, since as his Times obituary duly noted, his work was both extremely popular and highly controversial.

Wyeth touched a nerve in the midcentury art world for a few simple reasons: he was a realist painter; he had a public; his most famous work—Christina’s World—was accepted into the Museum of Modern Art in 1948, a provocative choice at the time. His detractors saw him as a reactionary, a purveyor of clichés, and (to quote E. B. White on critical slights against Thoreau) a kind of glorified Nature Boy. Others saw darker shades and deeper mysteries beneath the technically flawless surface. His son, Jamie, compared Wyeth’s paintings to Robert Frost’s poems: “At one level, it’s all snowy woods and stone walls. At another, it’s terrifying. He exists at both levels. He is a very odd painter.”

The comparison is precise and apt. Frost, too, was dismissed by many as a regionalist hack, until skillful readers and critics realized that poems like “The Most of It” and “Directive” were complex, powerful, universal—and indeed, terrifying in a peculiarly modern way. Now that the art-world politics of fifty years ago are a relic and, as the Times summarized, “the traditional 20th century distinction between abstraction and avant-gardism on the one hand and realism and conservatism on the other came to seem woefully inadequate and false,” we can assess Wyeth’s work, too, on its own terms without polemicizing about genre. To be a realist is not necessarily to be a literalist; to use an old-fashioned idiom is not necessarily to lack new ideas. Christina’s World is also Wyeth’s world distilled: isolated, alien, disturbing, fraught with an inexplicable cruelty that must be struggled against grimly. Why, sort of like the modern world!

In terms of technique, too, Wyeth was no complacent greeting-card realist. Says the Times: “The public seemed to focus less on [Christina’s World‘s] gothic and morose quality and more on the way Wyeth painted each blade of grass, a mechanical and unremarkable kind of realism…” Yet the unwashed masses may have been on to something that the Times and many critics overlook. Wyeth’s obsessive fidelity to textures and surfaces often heightened reality almost to the point of abstraction. In Black Velvet, his portrait of a nude Helga Testorf reclining on the titular fabric, the minutely-observed velvet looks somehow softer and sleeker than the real thing—and far stranger than abstraction could have rendered it. The composition, too, has a beautifully abstract quality: the nude seems at first to be hovering in empty space until the viewer looks closer and marvels at how rich that space really is.

Finally, speaking of Helga Testorf: Wyeth’s having painted his neighbor for years unbeknownst to his wife—and possibly having slept with her—and making boatloads of money off the revelation either way—is the kind of bona fide scandal the art world could really use these days. We have a soft spot for that kind of juicy hoopla, as well as for real-life artist-muse relationships (cf. D. G. Rossetti and Jane Burden, or if you prefer, D. G. Rossetti and his pet wombats). Lately the closest thing we’ve had to shocking art gossip is the second-rate Aliza Shvarts affair. Andrew Wyeth, we’ll miss you. 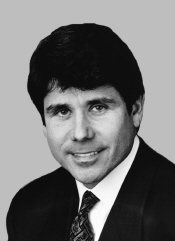 “Go hang yourselves all! You are idle shallow things, I am
not of your element. You shall know more hereafter.”

And the winner of the Blagojevich Literary Comparison Contest is…Holloway McCandless, whose apt comparison of the governor to Twelfth Night‘s Malvolio came the closest to satisfying our nagging sense that Blago emerged fully-formed from a book somewhere. As justification, she cited “the preening and the poetic overreaching, the overestimating of one’s position at court”; we’d also mention Blago’s attitude of wounded dignity (more hypocritical in his case than in Malvolio’s). The analogy may not be perfect, but it’s close enough to earn Holloway our Stylish Reader of the Week Award. Huzzah! As a grand prize, we are recommending Holloway’s own site, the newly-launched Litagogo: A Guide to Literary Podcasts—and are happy to do so, because the writing on it so far has been first-rate. Bonus style points to Ms. McCandless for working the phrases “sub-Dickens,” “beribboned aperçu,” and “how-we-live-now signifiers” into a single post; it’s always nice to find a kindred spirit on the Web.

Also deserving of mention (especially as he was, effectively, the only other contest participant) is “Governor Blago Shakespeare,” a merry prankster whose site, called Illinois Poet Laureate, features supposedly Blago-penned verse in the style of Dylan Thomas, Robert Burns, and Lewis Carroll, among others. Well worth checking out before the governor tragically fades from the collective memory (at least until the publication of his groundbreaking oeuvre, that is).

And speaking of website recommendations, an announcement: we are hereby retiring the category head “Marginalia,” in deference to The Elegant Variation. We had been using the term for many months, congratulating ourselves on our cleverness, before finding TEV and realizing that Mark Sarvas was using it in essentially the same context—and had thought of it long before we did. Rather sheepishly, we’ve continued calling our recommendations “Marginalia” until now, but today we are proclaiming the birth of a replacement term: “See Also.” We will be titling new posts and emending old ones accordingly. We’ll miss “Marginalia” a bit, but we think the new term is, to coin a phrase, an elegant variation.